SUN Token is a cryptocurrency and aims to develop decentralized finance (DeFi) on the blockchain network of the TRON (TRX). SUN Token is a volunteer project working on the TRC-20 token standard of TRON and is “the most important Bitcoin equivalent in TRON”. A dedicated community of volunteers controls transactions through some smart contracts.

The formation of the mining phase of the SUN Token began in early September 2020 and lasted two weeks before the official launch. Participants can stake TRX tokens of TRON or other TRC-20 tokens to earn rewards and management rights for holding the SUN Token. Here at Bitunivex we will explain everything you need to know about this token. Keep reading.

Who are the founders of the SUN Token?

First, we should state that the SUN Token is a Justin Sun project. It has already been placed in the crypto money market and is also known for its closeness with Binance exchange owner CZ. Also, it is a token released in the Defi category to serve various issues such as borrowing, lending, and earning interest by staking.

Justin Sun might have seen the demand for cryptocurrencies in different Defi categories with the help of the chain created by the Binance exchange. Then he immediately stepped into the event and changed the cryptocurrency he had established in 2020 in the decentralized finance category to the old SUN and introduced the new SUN. It is a token that is open to very manipulative events in the real sense and can be subject to hard ups and downs. On the other hand, the names behind it are among the top 10 names that come to mind worldwide when talking of crypto money.

What is SUN Token?

SUN Token was built with the TRON infrastructure and launched as the first integrated platform for stablecoin exchange, share mining, and self-management on TRON. It aimed to manifest long-term, decentralized and complete community self-management.

Justin Sun is notorious for promoting TRON and discussing cryptocurrency with Warren Buffett at a luncheon for which Sun paid $4.5 million.

SUN founders publicly and transparently promoted the SUN Token. Its whitepaper calls this a “social experiment” and plans for the future with the state that the token “could be involved in decentralized lending, insurance, liquidity, stablecoins, etc”.

The chief purpose of the SUN Token is to exist in support of the TRON protocol, which aims to create a decentralized internet ecosystem.

SUN focuses specifically on DeFi and helps TRON ingest and infiltrate the blockchain. Therefore, its function mimics the native tokens of DeFi platforms and rewards users for staking other coins and involving themselves in governance procedures.

Its appeal will be substantial for existing TRON users and those interested in DeFi staking and related activities.

Profit gains from the launching month of the SUN, September 2020, seem like a question mark. According to the whitepaper, the developers privileged “fair” token distribution and did not accept any funds, and non of the SUN Tokens were specific to them or their TRON team members.

This result is not following the results of TRON, which raised over $70 million in its initial coin offering (ICO) in 2017.

How many SUN Tokens are in circulation?

The SUN launch had zero premises, and its whitepaper states that the only way to earn it is by mining. This event was done by staking TRX or other tokens issued in TRC-20 standard TRON.

How is the SUN Network secured?

The founders have shared brilliant data on the roadmap for the future of SUN Token, which is available on his official white page; they announced that their first and chief goal is to connect numerous defense projects in the Tron ecosystem. They also stated that they are continuing the development and updating process on regular mining, genesis mining, and mining fairness for the 2021-2022 season. On the other hand, apart from all technical issues, Justin Sun and his buddy CZ, who are behind the SUN Token, have the power to bring the project to the ground if they want to.

Official information and review of the SUN Token

SUN Token made the following statement about the sun token they released via its official website:

SUN Token made the following statement about their vision through their official white page address:

Sun.io made the following statement about the SUN Token it launched as a local cryptocurrency:

Distribution information of the SUN Token

The distribution of SUN is a decentralized distribution through mining. The only way to mine SUN is to stake TRX or TRC20 tokens. (Includes Liquidity Provider LP Tokens).

Note: As of May 26, 2021, SUN Token has increased its supply by 1:1000. SUN Token distribution belongs to investors who hold or stake Trx coin. 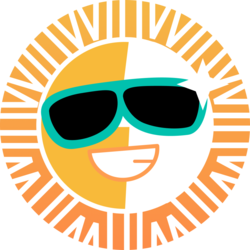 SUN Token is the native cryptocurrency of Sun.io, which provides lending, insurance, and liquidity services with its self-managed decentralized platform in the Defi category.

SUN Token has already passed many milestones has placed itself among the largest and most voluminous exchanges. It raises its users and investor bases due to the mining returns and provides the interest returns through the stake.

What is the mining information of the SUN Token?